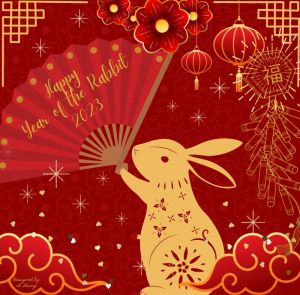 If you’ve been following my blog and saw my Lunar New Year post from last year, you won’t be surprised by this post.  Yes, it’s become my annual tradition.  And traditions are always good, right?

When I posted about the Year of the Tiger, I was free of the winter blues.  But….I did experience the blues afterwards, unfortunately.  And I’m hoping to fight off the blues this winter because now I have a higher risk for it, since both my parents passed away.  My father on Christmas Day and my mom 11 days later.  If you read my last blog post, you’d know that she was admitted to hospice on 1/2.  She passed away 3 days later on 1/5.  She was tired of fighting all her physical and mental issues for the past 3 years.  And she was ready, especially since she realized my father was gone.

Like last year, I’m still participating in my town’s initiative to encourage diversity and inclusion within my community.  It takes a village–both literally and figuratively–to counter racism, since racism exists in all communities, whether you’re aware of it or not.  The more community members take part in such initiatives, the better off all communities would be! Racism comes from stereotypes that come from ignorance that comes from fear. Communication and information have the power to wipe away all of that! But it takes a unified effort from within each and every community.

And like last year, I’ve been asked to help my local diversity group to come up with information to share about the Lunar New Year.  I am honored to be part of the Advisory Council for that group and that they adapted the information below to share with our community.

I created a 1-pager that contains 8 (8 is a lucky number for the Chinese) key points on the Lunar New Year on one side and a little tutorial on stroke order for the tiger character in Chinese plus a fun Word Search activity on the other side. This piece is great for sharing with kids and raise their interest and appreciation at an early age of the East Asian cultures that celebrate Lunar New Year!

The information contained in my blog post below is lengthier and couldn’t be jammed in to a 1-page document about Lunar New Year. Some of the information is even new to me, and all of it is just so fascinating that I had to share! Thank you for reading and sharing!

The largest human migration in the world

Did you know that 3 billion trips are made each year (including return trips) to visit relatives by plane, train and automobile to celebrate Chinese New Year?  Referred to as chunyun (春运), it is the travel period up to 15 days before the week-long observance of China’s Spring Festival (or chunjie (春) and up to 40 days. It is up to 40 days in part due to the lack of transportation options available for the millions to make each one-way trek during the same timeframe.  Depending on one’s luck in buying airplane/train/bus tickets, travelers end up traveling within the window 15 days prior to the start of and 15 days after chunjie ends. This year, chunjie starts on January 31 (New Year’s Eve) and ends on February 6. In modern China, most elderly parents still live in the rural villages of their ancestors, while the younger generation works in the cities.  Why do they call it Spring Festival when it takes place during the winter?  The Festival marks the end of the coldest days of winter, with people welcoming the coming spring with planting, which represents new beginnings and fresh starts.

YEAR OF THE RABBIT 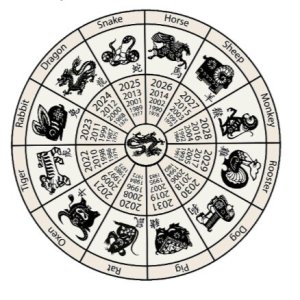 The Rabbit is the fourth sign of the Chinese Zodiac. The 3 words that best describe the Rabbit:  calm and gentle, yet persistent.  The Rabbit is also quietly charismatic, kind, thoughtful, honest, prudent, tactful, intuitive, considerate, wise, diplomatic, peace-loving, refined, forgiving, discreet, and gracious.  Generally, they are quite calm, do not exhibit aggressive behavior, and will avoid confrontation at all costs.

Rabbits are most often depended upon for their wise counsel, or as someone in which to put valued trust in a personal friendship or a business dealing.  Despite (or because of) their outwardly calm demeanors, rabbits are extremely shrewd In business dealings and may never show their hand until just the right moment. They are also quick to bolt from any perceived danger and intuitively know when to fold – and run!  Rabbits are usually relatively careful when it comes to their finances.  Good communicators, Rabbits make good diplomats, politicians and writers.  Quite creative, they can also make great painters or musicians due to their sense of beauty and their love of creativity.

Just as cautious in their romantic dealings, rabbits will not commit to any one person right away.

Introverted and private individuals by nature, Rabbits tend to give the impression of being elusive or enigmatic.  At the same time, they make warm-hearted companions to those they have befriended.

When angry about something, they will approach it calmly and considerately, hardly ever raising their voice.  Rabbits tend to avoid conflict as much as possible, shying away from competitive and aggressive situations.  Intuitive in nature, they are quite keen and pay close attention to the situations developing around them.  They are intelligent and quick, and can talk themselves in or out of most situations with no problem.  Though they may have a gentle outward appearance, they are quite strong-minded and have very strong wills.  Rabbits pursue their ideals all their lives in a precise and orderly way. They do things slowly and deliberately because of their caution. 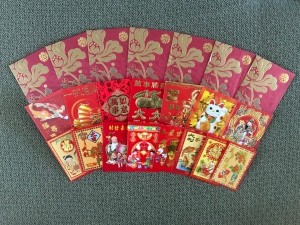 My collection of red envelopes saved through the years

1. Do gift crisp, new bills, as gifting dirty or wrinkled bills is in bad taste.

5. Don’t open your red envelope in front of the person who just gave it to you.

As in practically all other cultures around the world, there are a lot of taboos and superstitions adapted over the course of centuries, all of which have the intent of attracting good fortune into the New Year and protecting against bad fortune. Content © Ivy Shih Leung, 2009-2021. Unauthorized use and/or duplication of this material without express and written permission from Ivy Shih Leung is strictly prohibited. Excerpts and links may be used, provided that full and clear credit is given to Ivy Shih Leung with appropriate and specific direction to the original content.