My father (who’d had a stroke back in 2019 and has been deteriorating from a mental and physical standpoint for the past 3-1/2 yrs) passed away suddenly on Christmas Day from cardiac arrest. He’d tested positive for COVID (caught from our aide) before Christmas, but didn’t have a fever or any other sign except for lethargy. Our aide told me it’d be better if I didn’t come over because I could get COVID and bring to my family on Christmas. On the morning of 12/26, I was supposed to take him to an urgent care if he was still lethargic. But I never had the chance. We buried him on New Year’s Eve. He was 86.  Up until the end, he was always trying to see if he could get back to work despite his age, his inability to drive.  He’d worked up until his stroke.  He had accomplished so much as a structural engineer….so much for him and his family to be proud of.  But all he knew how to do was work.  He had very little in the way of social connections or hobbies.  I couldn’t get him to read newspapers/books/magazines or even do puzzles….things that could help him stimulate his brain so it wouldn’t atrophy.  So the family watched as his mental and physical condition deteriorated.  He was spending more & more time in his bedroom with his door closed and his appetite was decreasing up until I saw him a couple weeks before Christmas. My brother said it best during his eulogy at my father’s funeral service: “As his health continued to decline over the next couple years, deep inside, he struggled between what his heart wanted and what his body and mind could do. [When he] passed away….he finally found peace. I believe his spirit has been freed, and somewhere up there, his mind is creating once again.” 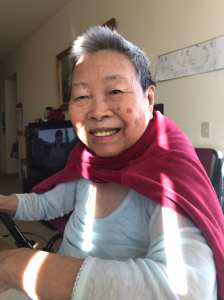 Taken 12/4/22 – mom was still smiling for me. Pictures are always so deceiving. You never know the true condition of a person based on a smiling face in a picture; but a mere 1-second glimpse. I didn’t know at the time that this would be the last picture I’d ever take of her.

My 87-yr-old mother has been deteriorating since she had a surgery in 2012 to remove a cyst near her spinal cord. She was probably undiagnosed OCD and PTSD with a lifelong history of anxiety. A lot of the issues that’s led to her current state were pretty much her own doing (from a mental standpoint because she kept telling herself & her family she just wanted to give up). She avoided walking because she was afraid her leg would swell, which is what happened post-surgery. Since 2012, she has had an eating disorder (would only eat edamame and rice) due to her fear of triggering an auto-immune condition called pemphigoid bullous (started after her surgery due to trauma from her recovery at the rehab center) that we got under control about 1-1/2 yrs ago with a daily dose of prednisone. I’m fairly sure her eating disorder was tied to her desire to no longer be with us, but I couldn’t talk her into seeing a therapist. I also tried to get a nutritionist to help, but she refused to listen to her.  Insisted on eating nothing but edemame and rice. She thought therapists and nutritionists were a waste of time/money.  She canceled the therapist appt I’d scheduled for her. By 2018, she refused to stand up/walk. It’s been painful to watch her deteriorate to the point that, as of a couple years ago, she couldn’t turn in bed, sit up, stand up, walk, go to the bathroom. The only thing she would do is feed herself.  Because we had her pemphigoid bullous under control, she was no longer afraid of eating all sorts of foods. I was so relieved!  But by this past summer, she stopped feeding herself, so her aide would have to feed her. For the past 3 years or so, she has also had a spitting habit (spitting her food into a small tub she kept on the table), which I was never sure was voluntary or involuntary. I just thought she wanted to spit her food out due to her eating disorder. Then, about a year ago, the spitting action started happening even when she was just sitting and watching TV. At that point, I was thinking it was definitely involuntary. From a recognition standpoint, she still recognized me but forgot my name and my brothers’ names. She would still smile whenever she saw me. But she hasn’t really talked for close to a year. So her baseline has been non-verbal, unable to do anything for herself, and not really remembering much.  A few weeks ago, I received a letter from Taiwan from a cousin I’d recently gotten back in touch with.  The letter informed us that my mom’s brother passed in July from not being able to eat and then not being able to drink fluids.  It seems this is a familial trait.

My mom also tested positive for COVID and over a few days had a temp of about 99 degrees a couple of times. But then she had no temp and all seemed fine except she was starting to eat even less than usual. My brother and I admitted my mom into the hospital on Christmas night. I do not know if she was aware what happened to my father. Since being admitted to the hospital, she hasn’t been able to swallow or eat and has been relying on the IV drip to keep her hydrated/sustaining her. She went from nodding/smiling in recognition when she saw me on 12/26 to no longer able to acknowledge/respond to me. Three days ago, her jaw is locked shut and she had involuntary spasm-like jaw/tongue thrusts (like she was choking, but there was nothing in her mouth) and two days ago, she couldn’t open her eyes (she kept trying to). She has become more emaciated in the past 3 days. It pains me to see her lying there looking that way. She went from crying out for my aide and my dad on Mon/Tue fairly frequently to no longer being able to call anyone’s name yesterday (but every few seconds while I was there, she would just call out).
We admitted her to hospice on 1/2/23.  To think, we almost started hospice back in 2019 and she bounced back so well with the help of our aide who has done so much for my mom for the past 6+ years.  We cannot thank her enough for all that she has done…all the back-breaking work of lifting my mother in/out of bed, helping to bathe her, dress her, feed her and bring her back from a very bad state over 3 years ago.  My brothers and I realize she will not be bouncing back this time.  She hasn’t had any water/food/IV drip since she arrived in hospice.  It’s 1/5/23 now.  It’s only a matter of time.

I hold her hand and whisper to her softly every day when I see her: “I love you, mom.”

This is all so overwhelming.  If you’re reading this now, please pray for my mom’s peaceful passing.  Thank you.

Content © Ivy Shih Leung, 2009-2021. Unauthorized use and/or duplication of this material without express and written permission from Ivy Shih Leung is strictly prohibited. Excerpts and links may be used, provided that full and clear credit is given to Ivy Shih Leung with appropriate and specific direction to the original content.