I wanted to post my memorable adventure into downtown Manhattan yesterday afternoon, but wanted to stick with my determination to avoid being political on this blog. But since I’m such a lover of analogies, it just dawned on me how I could work my experience (my visit with the Defiant Girl statue, also known as “Fearless Girl,” facing off with the Charging Bull at Bowling Green) into my blog.  So, here I am posting the experience of the adventure…with a twist.

I took the subway to Wall Street and walked over to check out the Defiant Girl statue and needless to say there were throng of tourists present on day 2, post debut.  Thank you, State Street (firm that manages $2.5 trillion in assets) for this statue!  I sincerely hope they will make this a permanent fixture rather than taking it away in a week or month!  State Street chose the perfect time–International Women’s Day– to put the Defiant Girl statue there.  And yes, I did take the day off for #ADayWithoutAwoman but I also took today (Thur) and tomorrow off for a long-overdue vacation. The statue was actually, upon further reading about this statue, a joint effort of State Street and the McCann New York advertising agency.  What a clever marketing effort to not just draw attention to the index fund giant’s effort to get more women into executive positions/board roles but also to the anniversary of the launch of an exchange-traded fund (ETF) that tracks companies that have higher levels of gender diversity in their leadership!  The plaque in front of the girl says “SHE makes a difference,” which cleverly not only represents the girl but also the ticker for the ETF.  I was surprised to learn that State Street is has warned the 3500 public companies in which it invests that it will vote their share against them if the directors of these firms do not make tangible progress toward adding women to their boards.

It was wonderful to see so many young children and families taking pictures of/with the statue. The statue of the girl faces the bull with her hands on her hips and a defiant expression on her face.  I overheard parents explaining to their children what the statue represents. This girl is standing in defiance against the bull, a symbol of not just the market (bull vs bear) but of an industry traditionally dominated by men.  And I thought to myself “This.” Raising a future generation of girls who will be fearless when faced with challenges in women’s rights (e.g., employment, reproductive rights, etc.).  I felt a surge of optimism despite what’s going on under the current Presidency (sorry, I had to mention this because it’s relevant to what I’m writing about). Despite the cold wind as the sun set, I stood there for about an hour, just taking in people’s reactions to the statue.  I will not forget this experience.

Here’s one of many pictures I took of the statue, and she happens to be wearing a pussyhat. I also took a picture of the girl facing off with the bull, which was not an easy thing to do given the number of tourists crowded around both statues and in between, but I managed to get this shot when someone yelled out for everyone to clear the area so pictures could be taken. 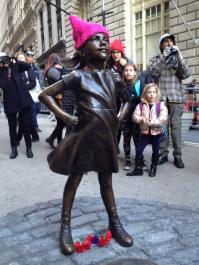 Here’s where my analogy comes in.

If you are fighting postpartum depression (PPD), think of yourself as the girl–with that look of defiance on her face and with hands on hips–and the PPD as the bull.  Tell it to back the hell off.  *It* can be the PPD itself, stigma associated with it, voices in your head that cause you to feel ashamed for not enjoying your motherhood due to this illness, and/or doctors who tell you to *buck up* or treat you with poor bedside manner.  YOU CAN DO IT.  There are resources and caring people around you who can help. It is not shameful to ask for help. It is not shameful to be sick. It is not shameful to have to take medication (I did). It is not shameful to be unable to feel the joy you thought you would feel after the birth of your baby. PPD is an illness that needs to be treated the same way diabetes or any other illness needs to be treated. 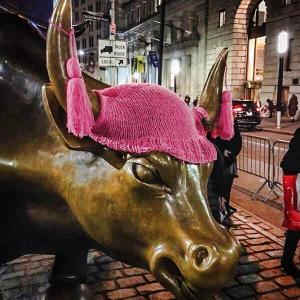 I also wanted to mention that my primary reason for visiting Bowling Green wasn’t even to see the statue (plans were made last week re: pussyhat on the bull but the statue wasn’t put up until 2 days ago, March 7th) but to be present for the pussyhatting of the Charging Bull.  Yes, you heard right. My friend, Sarah Kimball, spent the last couple of weeks knitting a hat just for the bull.  And her goal was to put it on the bull on International Women’s Day.  Here’s a pic of the bull. I wouldn’t be surprised if I saw this (or any other picture taken of it last night) somewhere else online or more ideally in a newspaper, like the NY Times. Brava, Sarah Kimball, for your awesome handiwork, a historic moment that I wish had been captured by a news outlet. But the picture is slowing making its way across the Internet, as it’s been shared via Facebook and Twitter. And now with this blog post.